Rhinos in the world are under pressure, no-where, it seems are they safe. Poachers have no love of wildlife, no love of nature, they see both as a means to wealth, caring not, the pain and abject suffering they cause. Their methods are brutal at best, horrific at worst. Imagine being darted with an anesthetic provided or obtained from a veterinarian and then have your horns hacked off viciously with a panga, cutting so deeply into your face that survival is near impossible, all because some evil little man in a foreign country prizes and values your horn to such an extent he will pay just about anything to get his grubby dirty hands on it. In actuality, the horn does not possess aphrodisiac powers, nor does it fight cancer, such that it does provide is psychosomatic. These criminals are now resorting to various other means of obtaining this prized product, such as breaking into museums and robbing the exhibits. But, their favorite approach is through the painful deaths of such beautiful creatures: They poison them; They use rocket propelled grenades to blow them apart; They use the AK-47 as a weapon of choice to riddle the poor beasts with 7.62mm ammunition, ripping them apart and causing massive tissue damage and trauma; Snares, these insidious and innocuous pieces of wire catch the animal around the throat or an appendage, more than likely a leg. The snare can cause strangulation or gangrene or both, restricting the movements of the animal until it expires due to shock, fluid loss or dehydration, cutting into the flesh until it reaches solid bone. Imagine the terror the animal experiences; Traps, these act in much the same way, unless of course the animal falls into a pit filled with sharpened pungi sticks, where its death will be quicker, but still exceptionally painful, filled with suffering and sorrow. . .

People use other techniques to fool and pull the proverbial wool over the eyes of government departments and customs, just to get these precious pieces of cargo transported to China, Vietnam or Thailand. For example: A syndicate will purchase the hunting concessions of several rhinos which are placed in small enclosures by farmers. Prostitutes are then used, by, presumably, the brothel owners, to shoot the animals. These horns are then shipped legally out of South Africa to Vietnam, Thailand or China. Another tactic is for a syndicate to buy concessions for a little old lady to shoot. Assisted by a big brave hunter, the lady bags her beasts of which the horns are then sent hurriedly to a taxidermist, mounted and shipped back expediently to the homeland, which, you guessed it, is China. But this is done so quickly they cannot even be bothered to mount the horns properly. Customs can’t stop it here or in the land of the red dragon, so it slips through to be ground to powder and sold in the marketplace. . . There are many other methods these heinous individuals use, nothing is too low or base. All this illegal trade has decimated a beast which once roamed throughout this beautiful continent. The worst of it is, however, the fact that general humanity is powering this destruction. Through purchasing goods manufactured in China we provide tremendous amounts of foreign currency for Chinese syndicates and individuals to power this illegal trade, by supporting drug cartels and prostitution we also support the decimation of the world’s flora and fauna. These eco-terrorists support terrorist groups in other countries by buying rhino horn, elephant tusks and lion bones from countries like Somalia where it is freely available in the marketplace. All this criminality goes hand in hand and rhino horn is just another highly prized item on their list to purchase, speculate or trade with. . .

What is being done about poaching? Isn’t it time everyone did their part. How can any sane rational being allow these horrific deaths to continue? These once proud beasts, horns hacked off, left to die in misery and extreme pain. Should not rhino horn be illegal to possess in any form? Should not the Chinese, Vietnamese and Thai governments impose much harsher stricter penalties for the possession of it? Enough is enough, these eco-terrorists have to be stopped, the criminals that murder and the criminals that use the ground up horn for whatever purpose, both are evil, both would see this proud beast pushed into the abyss of destruction. . . Any individual who has to prove his manhood by slashing and hacking an innocent harmless creature to death, or kills for greed, or, uses a powder derivative for sexual enhancement is neither man nor human, just an evil monster. . .

The society we have created has no morals or values, only greed prevails. The sickness man has perpetrated upon the wild denizens of the Earth is just part and parcel of a wholesale destruction of all life on our planet. Our use of fossil fuels has created a Global Warming and a Polar Meltdown that will ultimately destroy us all. Each one of us has a decision to make, do we support unconscionable acts or do we do something about it. . .

We all have to fight for rhinoceros wildlife preservation and conservation, allowing them to survive for enumerable generations to come, and, because no-one has the right to cause their extinction. . . 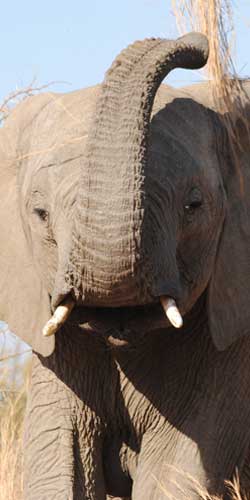