‘The Rhino Challenge’ is a cycle rally from the Johannesburg Zoo to Phalaborwa and Kruger National Park. The ride will take place over two days, gathering at the Military Museum above the Zoo, where there is excellent free and secure parking and toilet facilities.  The rally will proceed through the Zoo to the rhino enclosure and will then cover a distance of 250 km to Forever Resorts at Loskop Dam, then the next day travelling another 250 km to Forever Resorts Swadini after skirting the Kruger National Park.  Riders may choose to undertake just the first leg, ending at Loskop Dam, or may overnight at the resort where there are camping and caravanning facilities.  Accommodation in rondavels will be available at special prices.  The second day the rally leaves Loskop Dam early and proceeds to Swadini, where similar accommodation will be provided.  Every rider who completes one, or two, legs, will receive a medal and a certificate.  A prizegiving event will be held at Loskop Dam and at Swadini.

The ride, organised by RAPTOR, will highlight, worldwide, the rhinos’ plight in Africa, and raise funds so that RAPTOR can proceed with its projects. Entries will be open to individual riders or teams with backup at a cost of R 4 000 per rider.  This fee will not only provide funds for the organisation of the ride, but, will be ploughed back into conservation. The event will be covered extensively by both print and televised media groups and a documentary will be made by an independent film crew, including preparation before the event and the actual race itself. Press conferences will be held at the beginning and end of the ride with prominent celebrities and conservationists. For the start and finish of the race members of government including the sports and environment ministers, celebrities and television personalities will be invited to attend as a show of support for the environmental greening of the industrialized world. The date for the ‘Rhino Challenge’ is expected to be early December of 2012, but has yet to be finalized.

The ride will have great appeal to both local and overseas news crews as it highlights not only Africa’s wildlife and a stunning variety of landscapes, but also of things historically important to South Africa with its rich and diverse cultures as the ride progresses through small towns and places of interest. It also provides much in the way of opportunities to local business with the influx of international news teams and cyclists, and, of course, its tourism potential. The filming of the ride will provide a pallet of life throughout Southern Africa, from the human aspect and the impact they have had upon its flora and fauna, to the more positive aspects and the sheer beauty of places like the lowveld and Kruger National Park.

The event will start at the Military Museum with a troop of African dancers heralding in celebrities and possibly representatives from the Departments of the Environment and Sport.  The rally will pause briefly  opposite the rhino enclosure which now houses a young black rhino female who was shot nine times by poachers and had her horn hacked off. She was, however, one of the luckier ones having survived her ordeal. Each town passed through will be encouraged to take part, even if it just means verbal and moral support of the riders.

Each rider or team may have such support vehicles as they require.   There will be rest and refreshment points and medical facilities on the route.  Mobile medical teams will patrol the route and a doctor will be available.

“The ‘Rhino Challenge’, sport and conservation working together to promote a brighter and healthier future for both man and those that he shares the planet with – flora that provide a rich diversity to all life, and, living animate creatures both great and small. . .” 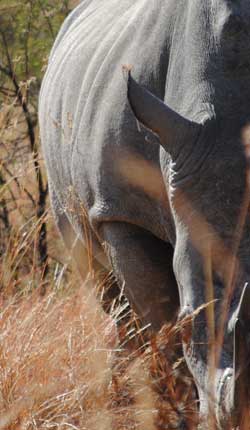